I made a comment recently that "no one eats wheat, just flour." Later I wondered why. When I started looking, I found this statement could not be further from the truth. People have been eating wheat as a whole food item for thousands of years.

To explore, I bought a bag of Bob's Red Mill Farro and Kamut, the grains look like this:

I cooked the farro and kamut according to the basic cooking instructions, which were to "soak overnight in water and simmer for 30-40 minutes in water or stock."

The cooked kamut (soaked overnight and cooked in chicken stock) looks like this: 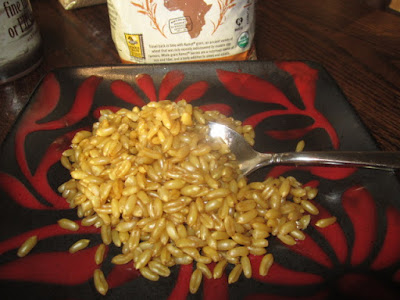 And it's very tasty. Quite amazing, really. It's kind of like very firm, large rice. It took on the flavor of the chicken stock nicely. I can see it would be nice to have a ready-cooked supply of this on hand to add to any dish, or just eat plain like we do with beans and rice.

The package has a recipe for "Grain Kushari," which, they say, is a common street food in Cairo. The ingredients being (Find full recipe here):

The word "Kamut" is always accompanied by a little trademark symbol. Apparently, this stuff is a variety of ancient wheat called "khorasan." Some farmers have revived the breed, and market it as kamut. The wikipedia article on Khorasan Wheat is very interesting!

According to a legend, those grains were found in the tomb of an ancient Egyptian Pharaoh, hence the nickname "King Tut's Wheat." It is not known when and how Khorasan wheat was introduced to Egypt. Another legend relates that Noah brings the grain on his ark resulting in the nickname "Prophet’s wheat."


The mineral content of 1/4 cup of kamut (farro is similar) should make everyone here happy:


As well as the vitamins:

I cooked the farro the same way as the kamut, and it looks like this: 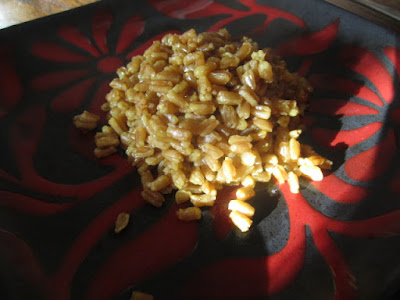 It has a similar taste, but the grains are much smaller than kamut. Bob's website says this of farro:

Farro is an ancient relative of modern-day wheat. It was a mainstay of the daily diet in ancient Rome, and is still popular in Italy today. Farro is hearty and chewy, with a rich, nutty flavor. Use in stews, casseroles, salads and pilafs.


I will second the "hearty, chewy, and nuttiness" of the farro. Eaten plain, it's a delight.  Nothing like I would expect "wheat" to taste like if served on a plate. I'm really surprised this stuff has not caught on. I like it much better than rice, and eating just a little bit really makes it feel as if you've eaten something substantial.

The wiki on farro describes this as the forerunner to our modern wheat, and gives some ideas on how it's traditionally eaten:

Farro is a food composed of the grains of certain wheat species, sold dried and prepared by cooking in water until soft, but still crunchy (many recommend first soaking overnight). It may be eaten plain, though it is often used as an ingredient in dishes such as salads and soups.


Bob's website gives recipes for soup, salad, and risotto. I plan on making this tonight with tomatoes and kale from my garden:

Farro is referred to as "whole grain alternative to white rice..." which I completely agree on. In fact, I think I may have found a new staple.

I've never had any problems with gluten that I know of.  If you are on a gluten-free diet, farro and kamut are not for you. However, if you are just avoiding gluten because of all you've been reading and have to real evidence that you are sensitive to gluten, then give these whole grains a try. Eating ancient breeds of whole wheat, cooked simply, is a far cry from eating Wonder bread.

My thought that "no one eats whole wheat" was completely wrong. People have been eating wheat since the dawn of civilization. Eating it today, as they did then, is a fun experience. I can see why humankind fell in love with wheat, it's just too bad that in our search for the perfect slice of white bread, we ruined it.

Anyone else ever tried farro or kamut?