This morning my inbox was full of links to a stock market blog where the blog host discussed the harms of an all-potato diet. "Mr. Potatohead: Fork You."  The person writing this post was commenting on Richard Nikoley's recent adventures in potato hacking in which he has lost a phenomenal amount of weight by eating mostly boiled potatoes: The Potato Diet Practicalities: Dropping Big Weight Fast With High Energy and Without Hunger.

Some quotes from the Mr. Potatohead article: 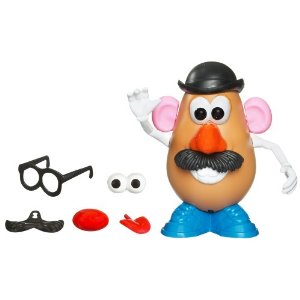 Folks, on the math that's insanity..

Potatoes are extremely high in potassium; one contains about 25% of your daily requirement., so if you're eating a dozen a day you're getting a hell of a lot more than you need.  If your kidneys are normal you'll whiz the excess out -- and with it, plenty of water -- maybe enough to severely dehydrate you.  Potassium is a necessary salt in our diet and is essential for normal nerve conduction, but unless you're a doctor (or maybe a cardiologist) you probably don't realize that it's the potassium balance that's important, not the gross amount.  You get this wrong and you can have a heart attack "out of the blue."

see 'ya in the morgue.


The person writing this then goes on to extol the virtues of a diet low in starches and carbohydrates. He actually gives some good diet advice, such as "eat no processed vegetable oil" and he seems to be a fan of exercise, so there is a bit of common ground.

Basically, outside of a lot of yelling by use of bolded and italicized words, his main points of contention with the potato hack are:


The first point (CICO) would lead us to the conclusion that all of the people who have seen fast weight loss while potato hacking are lying.  Admittedly, the 1/2 to 1 pound a day that people commonly lose while on the potato hack seems to be too good to be true, but it happens. Is everyone lying?

The second point, we'll look at a bit more closely. I'm sure no one wants to end up in the morgue.


I take all critiques of the potato hack very seriously. This is the first time I've seen anyone say that the potato hack could be dangerous due to excess potassium. Is he right?

The recommended daily allowance (RDA) of potassium set by the USDA is 4500mg per day. Three full pounds of potatoes has approximately 6000mg of potassium. This represents an intake that is 1/3 higher than the RDA for potassium. Should we be worried?

It's easy to google the dangers of too much potassium. The condition is called, "hyperkalemia." This condition is seen in people with poor kidney function. It is not caused by eating potassium rich foods, though people with hyperkalemia are told to avoid potassium rich foods such as potatoes, tomatoes, oranges, and bananas.  It can be caused by ingesting too much salt substitute made out of potassium, but the most likely cause of hyperkalemia is from a reaction to certain medicines (ACE inhibitors, NSAIDs) or as a result of several diseases (ie. Addison's Disease).

A 2010 study by the USDA showed that over half of all Americans are getting only 56% of the RDA for potassium. The mass-hysteria surrounding the call to lower salt intake in the US diet is actually an attempt to balance the sodium:potassium levels in our diet, this balance being more crucial than the actual amount. If most people ate the RDA for potassium, there would be no reason to limit sodium (salt), in fact, if everyone ate the RDA of potassium, we'd probably be told to eat MORE salty food.

The warnings of "see ya in the morgue" are probably much better suited to the folks out there who are eating the standard American diet and getting only half the potassium they require. An extra 33% is what you need.


The "Mr. Potatohead" article also focuses on the ratio of potassium to sodium, implying it will be automatically skewed when eating an all-potato diet. From an article by the National Institutes of Health: Sodium/Potassium Ratio Linked to Cardiovascular Disease Risk.:

Recent national nutrition surveys show that, on average, Americans consume about 3300 mg of sodium per day (almost 1-1/2 tsp per day of salt) and 2600 mg potassium per day. These are far from the recommended goals of 2300 mg or less for sodium and 4700 mg or more for potassium. In fact, a recent report found that only 13% of the population is meeting the sodium goal and well below 5% is meeting the potassium goal.


A huge problem in the US is too much salt and not enough potassium. To combat this trend, dietary experts have been stressing we need to eat less salt, when the real solution is to eat more potassium. Eating less salt may improve the ratio, but it does not increase the potassium.

So what is the ratio of sodium:potassium while potato hacking? It's hard to say. Calorie and nutrient calculators are all over the place! Some calculators show that eating 3-4 pounds of potatoes puts you in a "high sodium" category and others in "high potassium." I believe this is because some calculators derive their figures based on how people normally eat the food, ie. skin off, heavily salted. Others show the nutrition figures based solely on the food itself, a sampling:


Potassium and Sodium in 4 pounds of white potatoes

The outlier for sodium is FitDay and the outlier for potassium is the USDA. The general consensus is that potatoes are low in sodium and high in potassium, exactly as it should be for "proper balance."

If it was widely recognized that potatoes contained a dangerous level of potassium, I'd be the first to lose interest in the potato hack. As it stands, there is NO vegetable in ANY amount that has a dangerously high level of potassium. If you have kidney problems and a medical condition that results in high potassium (hyperkalemia), or think you might, then go see a doctor.


Potassium and sodium are two vital nutrients that play a big role in the success of the potato hack. I believe that when potato hacking, for the first time in most people's lives, their nutritional requirements are being fully met in a perfectly balanced way. Eating only potatoes for long periods of months or years could feasibly lead to some type of imbalance. Lots of smart people say otherwise, but to be on the safe side, let's keep the potato hack to 3-5 day increments and eat a well-balanced diet the rest of the time.