In July this year, I conducted an experiment. I sent identical fecal samples to American Gut and uBiome to see how they would compare. There have been several discussions on this subject, seeming to make the two rival microbiome test labs flawed in their methods. An explanation from uBiome.

One argument was that even on an individual turd, there would be differences in the microbes found on it's surface. Makes sense.

Another argument was that the normal sampling method, ie. wiping a cotton swab on used toilet paper, would also lead to different microbes being detected.  Sounds right.

I did things a bit differently. I did my "#2" in a new, food grade, plastic bag. Kneaded it thoroughly. Then I touched the exact same spot lightly with the swabs provided by the two companies.

I now have the results!

Unfortunately, the two companies provide completely different looking reports, so it is impossible to hold them up side-by-side and look for inconsistencies.  What I did instead, was go line by line on each report and any time I found an exact same genus listed by name, I wrote down the results to compare. But first here is a bar chart I crafted to give an overall impression: 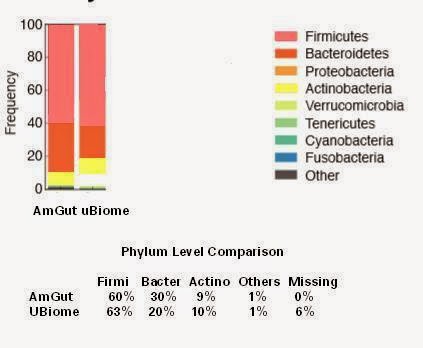 I am pretty happy with the phyla numbers.  Better than the other comparisons I saw.

Here are the genus level comparisons:

Strange.  Some really big discrepancies and also some eerie similarities. I'd say overall they did a pretty good job, but when they were off...they were WAY off.

Overall, I'm impressed with the comparison.  It's possible that the major discrepancies were due to sampling differences. And anyway, this is all just for fun.  I am glad that at least it seems that both companies found pretty much the same microbes, and in the same relative abundances.  I feel good recommending either company, but would caution against head-to-head comparisons.

Obviously it makes a direct comparison between AmGut and uBiome, like I did here, pointless.  And if anyone was looking at this chart to make grand statements, you were wrong and may want to correct them.


If there are any biotech geeks out there, the uBiome raw data can be found here:  uBiome.txt

If anyone knows how to get the American Gut raw data, please drop me a comment or email.  I found a link that says it's available through EBI.  Has anyone tried to figure it out yet?


The raw data can be fetched from the European Bioinformatics Institute. EBI is part of The International Nucleotide Sequence Database Collaboration and is a public warehouse for sequence data. The deposited American Gut Project accessions so far are:
Processed sequence data and open-access descriptions of the bioinformatic processing can be found at our Github repository.
Sequencing of American Gut samples is an on-going project, as are the bioinformatic analyses. These resources will be updated as more information is added and as more open-access descriptions are finalized.